Tigernut or chufa plant with it roots and rhizomes.

The tigernut or chufa ( Cyperus esculentus L.) is a herbaceous plant, closely related to Cyperus rotundus. It contains a rhizome or a root storage organ which is like a tiny edible potato and it has many nutritional attributes and medicinal properties.

The chufa has been consumed for millions of years by the ancestors of the current Homo Sapiens and is an ancient grain that appears in various parts of the world from the banks of the Nile during the time of the Pharaohs, to Africa , South America, Spain and China in the twentieth century.

In Spain , it has been cultivated for over a thousand years in the northern garden area of Valencia, known as “L´Horta Nord “, which is still a living example of sustainable family farming.

L’ horta Nord is a region formed by 17 municipalities in which more than 550 farming families are registered and enrolled in the Regulatory Board of Chufa of Valencia ( 95 % of Valencian farmers cultivate chufa).

A Valencian farmer working in the chufa fields

It is a model of micro-farming. Every family has their small plots of land and the right to irrigate through a system of canals of Roman-Muslim heritage. The irrigation water management is regulated by the singular “Water Court” which meet to solve mishaps that may arise from the use or misuse of water every Thursday.

In Valencia , tigernut is cultivated once a year (in other parts of the world it may take two or even three cycles). It is grown in spring and harvested at the end of the year (December- January). Today the grass is burned in the field , but in other times it was used to build the roofs for the huts, and to compost, make bedding for livestock , etc.

When harvested, the tigernut is washed in fresh water to clean away the dirt, rocks, roots … (previously this work was done with a hoe in the same irrigation canals) .
Then, the tigernuts are kept in the “cambra”( buildings constructed to dry tigernuts and tobacco). It´s spread on the floor and turned every day by hand so that it dries out evenly and the wet tigernut doesn´t rot. This process takes up to three months.

The “cambra” is full of windows that the farmer opens or closes depending on the direction of the wind. It´s during this process that the chufa starches are transformed into natural sugars, giving that peculiar flavor to Valencian chufa. 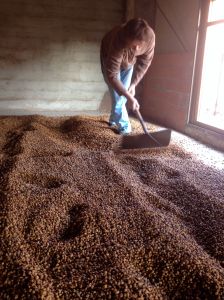 Elsewhere in the world, tigernut is not cured as in Valencia. Its left to dry on the ground naturally, and while its size is much larger and more visually appealing, it´s taste and qualities are far from the Valencian´s one.

Depending on the weather, in late April or early May chufa is dry and ready for consumption.

For many years, tigernut has been a profitable crop perfectly articulated in culture and idiosyncrasies of local soils and climate.

The dangers it faces today :

1 – 6 years ago in 2007, 5 million kilos of chufa were harvested a year. Today there are only 3 million kilos. For companies engaged in industrial horchata (some of these are from Valencia itself) African tigernut is much cheaper. These companies are promoting unfair trade crops. African farmers, adults and children, labour in slave-like conditions. This is a big problem which also destabilizes the Valencian market and endangers the profitability of the local culture model based on family farming. In which, by the way, are becoming more organically certified every day.

2 – The second threat to the survival of this model is the urban pressure from some municipalities in the area. They´ve reclassified farmland, allowing construction and obliterating developable land to construct more and more apartments , shopping centers, etc. . Fortunately, the crisis of the housing bubble has led to the end of this urban nonsense for now.

Against this background, what can we do?

1 – Buy chufa that has the seal of the Origin Denomination of Valencia Region, which ensures that a product is locally grown, and if it is certified organic, even better. 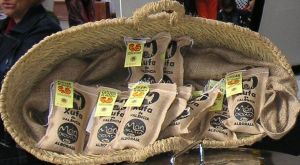 Chufa sacs with the seal

2 – When we consume horchata or tigernut milk, make sure that the company which makes “horchata”, whether artisan or industrial production, has an official certification. In the case of the industrial market, ” Chufi ” is the only mark which has chosen to use local chufa from Valencia . Funny, since “Chufi” belongs to a French multinational , however, they show much more sensitivity to the gardening and local production than large Spanish horchata companies, including Valencian ones.

3 – Defend family farming as a sustainable agricultural model and promoter of the local economy by buying “locally”.